LAKELAND | When you think about an aviation parts manufacturing company, you may envision men in suits sitting in a boardroom or lots of guys with grease on their hands putting stuff together. 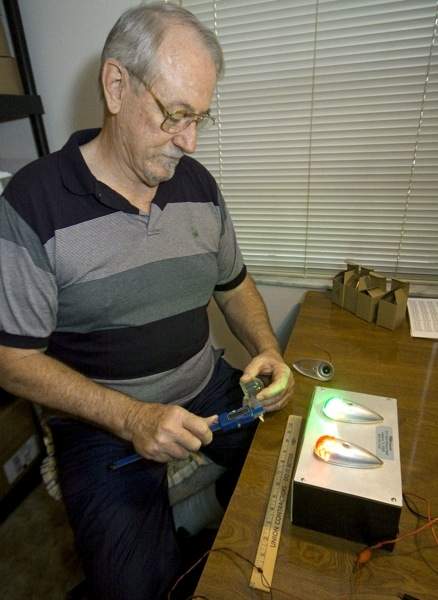 Bob Perigo tests equipment. LED lights for planes are some of the company's best-selling items.
MICHAEL WILSON | The Ledger

Mary Perigo counts out aircraft parts for an order.
Michael Wilson | The Ledger

What probably doesn't come to mind are two sisters, their parents, and their pets working out of a small facility in North Lakeland.

But PSA Enterprises, which distributes aviation parts to customers all over the world, is just that - a company with worldwide reach where sisters work side by side and where the family cats roam freely.

PSA Enterprises started with Robert and Louise Perigo in a suburb of Chicago 32 years ago and now has a customer base of about 200 plus.

The company started as PSA Enterprises as an idea to achieve a more secure financial situation for the Perigo family.

Before the company started in 1977, Robert was working as a sales manager at Paragon Electric Co., an electrical mechanical controls company based in Wisconsin.

Because of Robert's love for aviation, the choice was an easy one.

With business growing, the time came that Robert and Louise had to make a choice: Do it full time, or don't do it at all. The decision was made to make it a full-time operation.

Shortly after, in 1990, the company moved to Lakeland. The move placed the business close to the annual Sun 'n Fun Fly-In event, and relieved some of the tax burdens of Illinois.

The company saw steady growth for 15 years, but has seen the growth diminish somewhat after the events of Sept. 11, 2001, and the trio of hurricanes that pounded the area in 2004.

"It's hard to imagine doing anything else," she said.

Her sister, Mary Perigo, joined the company in 1999 after graduating from the University of South Florida.

Over the years, the daughters have taken on more of the operation and now handle everyday operations. But their parents, while in partial retirement, are still involved in different aspects of the company. For instance, Robert Perigo is still in charge of the engineering aspects.

"They keep me around to do some of the technical stuff," said Robert Perigo.

Louise Perigo still oversees many of the day-to-day operations, but began spending summers in Wisconsin to pursue being an author in 2000. She publishes with PSA Enterprise's sister company, PSA Literary.

Being in a male-dominated field isn't an issue for the sisters.

"I always taught them to be more qualified than the next guy," said Robert Perigo.

He also believes that his daughters have a good ability to communicate with men.

From their small office, Mary and Elizabeth oversee the purchasing and assembly of their products.

Some of the operations that require a manufacturing plant, such as the making of the glass, are outsourced to factories that create the parts to the company's specifications.

One of the company's newest and most popular products is positioning lights that go on the wings of all types of planes.

The LED lights came about as a new idea to recover from the downturn in growth.

The lights are assembled from loose parts.

While working together, the family has grown much closer. The two sisters have especially grown close.

"We always got along," said Mary. "But she really is one of my best friends now."

Mary and Elizabeth also have learned many things from their parents, which have translated into their business.

One of the biggest lessons learned is the art of being frugal, and living within your means.

Because the company is based out of a small facility that has already been purchased, the overhead is much lower than that of a place near the airport.

"It's a matter of economics," said Robert.

Working with people they know so well has also made the company a more efficient workplace.

Elizabeth feels she is very much in tune with her family members.

"If they aren't around I can anticipate what they would do," she said.

And because it is a family business, there isn't much selfishness.

Although now in his 70s, Robert doesn't ever see himself in complete retirement.

"I'm active, and always wanting to do something," he said.

Even though he may not continue his work with PSA Enterprises, he plans to continue in aviation.

Robert is a licensed pilot, and loves flying his own plane.

Neither sister knows what will happen once they are ready to retire.

"We'll cross the bridge when we come to it," said Mary. "I like the business being small, but I do want to see it grow."